The history of water management in India goes back a long way. Mohenjodaro and Harappa were highly developed cities in the ancient times. These cities were well-organized and built of brick and stone. Their drainage systems, wells and water storage systems were ahead of their time, which set their civilization apart from all other ancient civilizations and stand out as a phenomenon to be marveled at.

Every village in the Sindhu-Saraswati basin – where these civilizations existed – had a water storage tank. Some of these structures still stand today, as a proof of these prosperous times. In these cities, all houses, including those that were at the periphery were linked to the respective city’s central drainage network.

The Indus Valley Civilization that flourished along the banks of the river Indus and other parts of western and northern India had the most well developed urban water supply and sewage systems in the world. This civilization maintained high standards of hygiene and sanitation, and had enclosed drains that were laid beneath the streets of the towns.

About 80 kilometers from Ahmedabad in Gujarat stands the ancient Harappan town of Lothal. Today this town has a landscape that is sun burnt, parched and has little natural wealth – true to its name, which in Gujarathi means ‘mound of the dead’. But, 4,000 years ago, this city was a thriving port, and was counted among the principal centres of the Indus Valley Civilization. 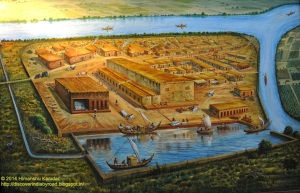 Apart from using sophisticated town planning concepts, there is tangible evidence of integrated land and water transport practices (terraquaculture), that seems to be quite advanced.

Terraquaculture in Lothal was based on lunar farming cycles and made effective use of seasonal flooding. It involved an integration of the city’s infrastructure with its ecosystem. Waterways were created for transport within Lothal; there were canals for irrigation and aquifer wells for domestic water supplies. Lothal’s residents had developed intricate drainage systems and sophisticated brick cisterns for cleaning and purifying water. These were equipped with aeration chambers and lime and charcoal filters. Mining, manufacturing and other industries were located near waterways and linked through networks of river ports, canals, shipyards and warehouses. The people in these cities knew the results of integrating water management with industrial life.

Another excellent example is the well-planned Harappan city of Dholavira, in Gujarat, excavated in 1989. There was a flourishing civilization here well before 3000 B.C., which continued for more than a millennium. The desert climate and dry conditions of the region, where several years could pass without any rains, perhaps prodded these people to innovate sophisticated water conservation systems of channels and reservoirs, the earliest found anywhere in the world and completely built out of stone. They were used for storing the fresh water brought by rains or to store the water diverted from a nearby rivulets. 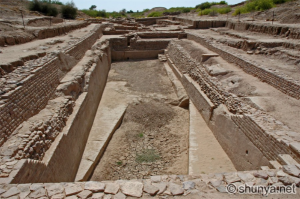 In ancient times, houses in parts of Rajasthan would have a rooftop water harvesting system. Though rains are scarce in Rajasthan, rainwater from these rooftops would trickle down and flow into underground tanks. Perhaps, one of the oldest water harvesting systems in the world can be seen at a place near Pune, called Naneghat. A number of tanks were made out of the rocks for providing drinking water to travellers along this ancient trade route. This area had rock-cut cisterns, ponds, tanks and wells that were used for water harvesting.

These developments were not confined to any one particular place and could be seen across the region. Underground earthen pipes were constructed many years ago to carry water to distant places. Some of them can still be seen in place like, Burhanpur in Madhya Pradesh, Golconda in Andhra Pradesh, Bijapur in Karnataka, and Aurangabad in Maharashtra.

The Chandragiri Fort in Andhra Pradesh had 2 rainwater-harvesting systems in the 10th century. One was used for creating water self-sufficiency for its residents, considering the unpredictability of wars. The other structure provided water to the fort’s moat. Both the fort and the moat are in a dilapidated condition today. However the harvesting system is still functional. There is a granite hill that allows almost all the rainwater to collect in a huge open reservoir of 2.6-million gallon capacity, at the foot of the hill. A great deal of scientific thought and planning appears to have gone into its construction. Its architects have rightly adopted a conservation method that involves catching water flowing down the steep granite hill slopes which, by its very steep nature did not allow any habitation to grow around it, and thus ensured purity of water. The enclosure of trees around the reservoir minimizes loss due to evaporation, and the lotus plants in it are said to have a purifying effect on water. The water is untreated and pure, which is good for human consumption.

At Inamgaon in Maharashtra, excavations have revealed irrigation channels and systems of water harvesting and water distribution dating back to 1600 BC. The rock pillar inscription of Skanda Gupta (456 AD) at Junagadh describes the repairs of Sudarshan Lake built 300 years prior. The Kanheri caves (1st century AD) and other Buddhist caves have a system of water harnessing and distribution, which are serviceable today. Apart from these, thousands of other water-harvesting systems existed all over the country and were maintained by rulers and the residents.

Over the last 200 years, the country has lost much of its big and small traditional water harvesting sources. Delhi for instance, has allowed nearly 274 stepwells, built during the Mughal rule, to dry up. The story is no different in other major cities of our country. Taking a leaf out of the fascinating past of water management and conservation in India, water can be harnessed through rainwater harvesting, recycling effluent water and creation of a viable network of tanks, rivers and distributaries.

A high level of fluoride in the water is a problem faced in many parts of our country. High levels of fluoride in water lead to many illnesses such as dental and skeletal fluorosis. Ancient Indian technology mentions of simple and effective methods to bring the fluoride levels to acceptable range. CART has taken up research on treatment of water based on these ancient methods.

Tulasi (Basil or Ocimum Sanctum), Vetiver (Khus) and Drumsticks (Moringa Oleifera) are supposed to have effect of lowering fluoride levels. These are being tested for their fluoride lowering properties. Various strengths of these substances are mixed with water to which a known concentration of fluoride has been added. The active substance is stirred well and allowed to interact for a given period of time. Then the fluoride content in the water is measured.  Preliminary studies have shown that all the three materials reduce the concentration of fluoride in water. Now further detailed studies will be conducted to find out the concentration of the active substance and the duration of its interaction with water, at which we will get the optimal fluoride lowering activity. This will also give us the relative merits of these three substances in terms of lowering fluoride content in water. Once this is established, this principle will be used to design a domestic water treatment unit which will be a low cost device, not dependent on power.